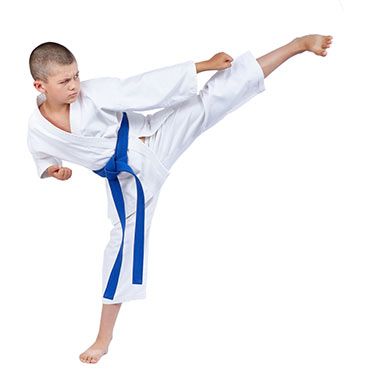 The Best Blue Belt from Amazon

Karate is a martial art, one with a rich and long history. Although the discipline is long, the karate belt color system is relatively new. Students of the art, called a karateka, have been pursuing it for many years. It is only since the turn of the 20th century that progress has been graded with colored belts, kyu, and dan, black belts.

Karate was first practiced in Okinawa. In the early days, this form of martial art had to be practiced in secret. Any outward acknowledgment of a practitioner’s status was unwise, if not impossible. Initially, masters of the discipline would select a few students they felt were worthy of learning karate. For their tutelage, they did not charge the student any fees. A student’s progress was measured by the number of years he dedicated to practicing, not by an assigned rank as it is today.

When Did Belts First Become Part of Karate?

The first evidence of a colored belt system dates back to the 1880s when Dr. Kano introduced it. Dr. Kano is known as the father of judo. He created the belt color system as a method that he could use to grade a student’s progress. The system was later adopted by the founder of Shotogan Karate, Gichin Funakoshi. Eventually, a black belt of Funakoshi’s would take the ranking system to Tai Kwon Do.

The Development of the Color Ranking System

In the early days of martial arts, there were only two ranks, white and black belts. When a new student of the disciple first started, he was given a white belt. As the years of training wore on, the belt became stained with sweat, blood, and tears. Over time, the white belt of the novice became black, proving that the student had reached a level of expertise and prowess, earning the student a “black” belt. A remarkable story, but sadly, it is likely a myth. The truth is, there is little in the way of historical evidence of the process of elevation and recognition with the discipline.

Although the black belt story may be a myth, there is some truth as to why belt colors become increasingly darker as the student moved through the ranks. As has always been the way, the student began his journey with a white belt. During the post WW2 era, money was scarce, so dying the belt an ever-darkening color was the cost-effective way to measure growth and progress.

The Meaning of Karate Belt Colors

From the different color belts worn by karateka, it is easy to judge the rank or level of expertise the individual has reached.

A blue belt is the fifth in the progression towards the coveted black belt. The belt colors depict the growth of a plant. When one reaches the blue belt stage, it depicts the plant growing taller towards the sky, which is blue. The karate student is going deeper in understanding each karate move, being able to differentiate each in the pursuit of knowledge.

Karate belts are important. The color signifies the attainment of specific requirements. However, within each rank of the discipline, there can be found students a considerable difference in the skills of the student. To the student of karate, rank is not the goal, it is a side-effect of training and discipline. The true goal is personal development.

The Best Blue Belt from Amazon