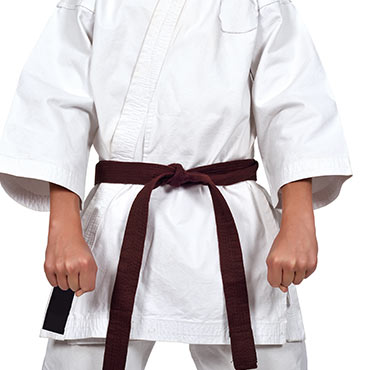 The Best Brown Belt from Amazon

Karate has a long and prestigious lineage that has evolved considerably since its creation. What was once a discipline reserved for a select few individuals has since become a global phenomenon.

With this globalization came about a ranking system used to separate students of different skill and maturity levels. The brown belt is one such rank.

The brown belt in Karate is second only to black in this ranking system. In this article, we are going to discuss the significance and the history behind this rank.

The History of the Brown Belt

The original Karate practice migrated from Okinawa into the mainland of Japan. Okinawan Karate Masters changed the practice to be more approachable to mainstream Japanese students.

Before the late 19th century, Karate belts and colors did not have significance. This was until a man named Jigoro Kano adapted the system to make it a safer and more appropriate practice to teach. At the time, the belt ranking system only included three colors:

The original brown belt had three different levels within its own rank. These levels are also known as kyu ranks and were represented by tape or belt shade depending on the school.

A student would have to advance through these kyu ranks to be considered for advancement to a black belt, also known as dan ranks.

Despite the evolution of the martial art over time, the brown belt still commands a high level of respect today.

How Long Does it Take to Earn a Brown Belt in Karate?

On average, it can take over five years to earn your brown belt. Many aspiring karate students fall short before even coming close to this grade.

As such, being awarded a brown belt is an honor reserved for students who have shown a deep understanding of the art form, have displayed the dedication needed, and are of the appropriate maturity and skill level.

As it requires an immense amount of knowledge and refinery of the art to achieve, the brown belt often signifies that the student is adequate in his training and is now ready for combat.

The brown belt often shows that the student is now ready to progress into the dan ranks or black belt levels of mastering the art. It can often mean the student demonstrates a lot of maturity and is ready to further their skill or that the student shows incredible skill but needs to refine and grow within themselves.

No. While the art form originated there, there are now Karate schools all over the world.

While you do have to pay for your lessons and grading, it is a relatively inexpensive process.

The brown belt, as well as Karate as a whole, is steeped in discipline and history. It is not an undertaking for the faint of heart.

Despite that, if you feel like that is an objective you would like to complete, there is likely a karate school local to you that you could apply to.

The Best Brown Belt from Amazon