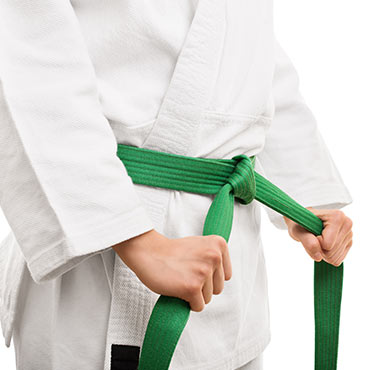 The Best Green Belt from Amazon

Karate, in the Japanese language, means “open hands.” Karate traces its roots back to the island of Okinawa. It was developed initially as a form of self-defense when occupying forces banned the ownership of weapons. Karate began as “te,” which means “hand” or “empty hand.” It originated as a fighting form used by Ryukyu Island natives. As Chinese families settled on Okinawa, Karate was influenced by kenpō.

Before Karate’s appearance in Okinawa, very little is known of its origins. One theory suggests it was a form of martial arts that was brought to Okinawa from India. The historical background of Karate is still being debated.

Karate, as a form of martial arts, has blossomed. Over the years, it has evolved and now is taught around the world. It continues to change and grow. Today there are four distinctive styles, namely Goju-Ryu, Shito-Ryu, Shotokan, and Wado-Ryu.

Karate Employs Kicking, Striking, and Blocking with Arms and Legs

Practitioners of Karate use both arms and legs to kick, strike, and block. The emphasis is on focusing on the body’s power at a specific point at a particular moment of contact. The knuckles, the outer edge of the hand, the ball of the foot, and the heel, forearm, knee, and elbow are all employed. To toughen the striking surfaces, the karateka (karate practitioner) practices against a padded surface or wood. An expert in Karate can break several inches of pine boards with their bare hands or feet. Although physical toughening is important, timing and tactics are of equal importance.

When sparring or practicing, kicks and blows are stopped short of impact. Contests pit one participant against another, or a single competitor performs a series of movements that simulate both offensive and defensive moves.

During full-contact karate competitions, several different formats are used. None of the formats, knockdown, American, gloved, Bogu Kumite, full-contact, or combat are organized. Some organizations adhere to a given set of rules, while others use several formats at once.

Karate belts are made of thick cotton. The color of the belt or “obi,” signifies the skill level of the wearer.

The colored belt system is said to have been developed by Dr. Jigoro Kano, thought of as the founder of modern judo. Dr. Kano thought colored belts would be an indication of a student’s progress. The founder of Shotokan Karate, Gichin Funakoshi, adopted the system.

Six belt colors cover the 10 level system. The beginner belt is white, indicating that the student has made no progress. The white belt aims to hold the karate outfit, called a “gi” together. The beginning student is taught how to tie the belt and wear it properly.

The belts progress through orange, blue, yellow, green, brown, and black. Orange through brown belts, recognizes progress from “X” Kyu through “I” Kyu. There are three levels of black belt, first, second, and third Dan.

Once a student of the art progresses to a green belt, they can execute a roundhouse kick and a series of new strikes. At the green belt level, the physical requirements increase as well. In Karate, green represents growth, the level where the student is expected to grow in preparation for advancement to even higher levels.

The Best Green Belt from Amazon