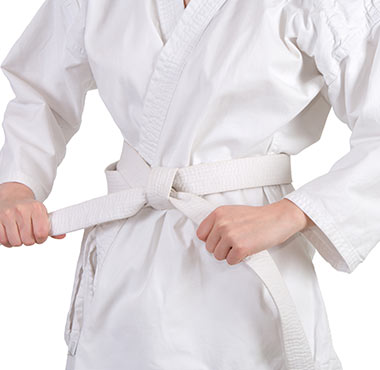 The Best White Belt from Amazon

The color of a belt that a particular person is wearing is an easy way of judging the rank of that individual. Many people know that the highest ranking is a black belt, and the lowest is a white belt. However, not many people know how exactly to progress from a white belt or the history of this ranking system.

What Does The Color White Represent?

The white color is used to indicate the birth of a new light. Thus, this color is usually used to represent a person who is beginning their journey of understanding the art of karate.

The birth of a new light is used to represent the challenges that the individual is yet to face. This portrays the individual in their process of learning the right skills to progress up the ranking system, and ultimately achieve a black belt and mastery of the art of karate.

How Long Does It Take To Earn A White Belt?

It takes approximately four weeks of training to earn a white belt. The standard procedure for acquiring a white belt involves attending an average of four group training sessions with a qualified instructor. You achieve this white belt alongside your first training dobok.

In these group training sessions, attendees are taught the class structure, fundamental skills, and terminology. These sessions are treated as an introductory phase and are sometimes called orientation classes. Thereby, when you join the proper training classes, you do so in full uniform and have a general understanding of how to participate.

What Happens After I Receive A White Belt?

The beginning stages of karate are taught to those who have yet to understand this particular art form. The necessary skills in this art form are taught. The white belt is a representation of determination and commitment to learn and grow.

The History of the Ranking System

The system of denoting rank by the use of colored belts was first used in Japan by the inventor of judo, Jigoro Kano. Jigoro Kano first made this belt color introduction to the ranking system in the 1880s. The previous ranking systems provided certificates only.

However, the initial ranking system saw wide obi being used. Participants conducted training in a kimono, and only black and white obi were used. Other colors were only added after the introduction made by Jigoro Kano.

The systematic use of representing a particular color to the specific ranking is less commonly found in art forms that don’t claim to have a far Eastern origin. However, this type of ranking structure is used in the Marine Corps Martial Arts Program.

The Best White Belt from Amazon