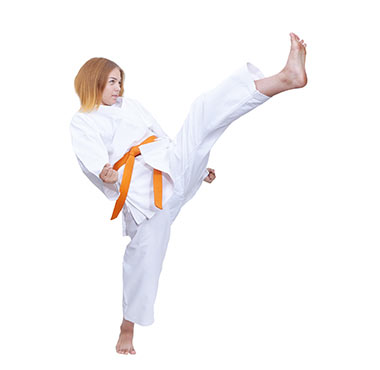 The Best Orange Belt from Amazon

Karate belts have an interesting story around them. They represent a standard class or rank advancement, but they also have deep meanings that represent the student’s philosophical and skill improvement. Many schools give each belt unique meaning, but generally, most of them use a similar approach.

In this case, we are going to talk about the third belt color in karate, the orange belt. According to a popular legend, the reason that karate belts get a darker color as the student advances is that each student was given a clean, white belt that represented the beginning of their development. As the student practiced, the belt would get stained with different things such as sweat, dirt, or blood. This would make the belts get yellowed and darkened until they reached a black color.

However, there is no evidence of this story, so it may or may not be accurate. Up until the end of the 1880s, karate belts’ only purpose was to hold the students’ pants. After that period, the Mater Jigoro Kano (The creator of Judo) started to create a ranking system that consisted of a white and a black belt in Judo. Around the 1930s and 1940s, the colored belt system was born thanks to other masters implementing their own belt ranking system until they reached the colored system, and it has now become a way to represent a student’s progress and growth.

How Does the Karate Ranking Work?

The ranking for belt colors depends on the school and its master. The most common ranking system used is the six-Kyu system. However, there are some schools that use eight, nine, 10, or 12 Kyu systems. “Kyu” refers to student ranks, which represents the practice and growth stage. In that stage, students are called “Mudansha.”

When the student reaches a practitioner stage, they are called “Karateka” until they reach the highest student rank.

What Does the Orange Belt Mean?

In most cases, the orange belt comes after the yellow belt and before the green belt. This belt is given to a student that is beginning to master the fundamentals of karate, and wants to take more advanced teachings from the karate master. In a more technical aspect, this belt is given to students when they have mastered the basic 10 self-defense moves of karate.

As for the color orange, it represents the sun’s constant growing strength. The way most students and masters see it is as to how the sun’s rays change from a deep yellow to bright orange as they intensify. Another popular meaning refers to the warmth that the hot sun produces and radiates on a growing plant. An orange belt student should be able to tell the difference between giving and taking in life.

For a yellow belt student to rank up to an orange belt, they need approximately six months of active karate training.

Reaching an orange belt in karate is not just about becoming better at karate. A new color symbolizes that a student has earned certain knowledge and wisdom over their practices, and they are ready to face new and more demanding challenges. As a student goes higher in rank, they start understanding what each belt stands for.

The Best Orange Belt from Amazon